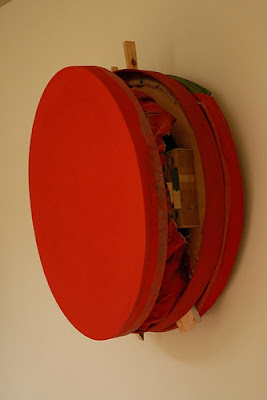 The work Simon Callery makes is determinedly positive.
As the above video clip shows Callery is both direct and sincere; important qualities he shares with his work. Bold, substantial structures that imply industry in both senses of the word: Callery’s paintings are the result of a clear vision executed to perfection. They are physical without being muscular; imposing but not overbearing and they demonstrate a dogged engagement with painting that is rare in its thoroughness.
It's good stuff.
by neill clements 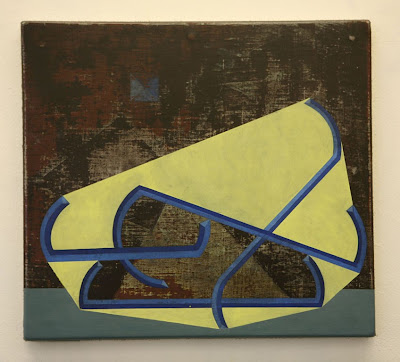 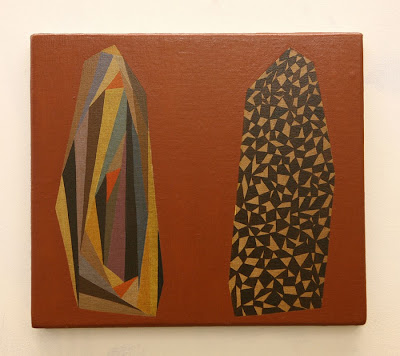 Studied and undiluted.
This little maroon painting (above) made a great impression on me when I saw it at the Jerwood Space in 2009. It just looked so much better than anything else around it.
Aidan Doherty makes small, complex paintings that unfold as you look at them. They are rich, focused, and devoid of anything superfluous. They are paintings which concentrate on painting and its possibilities. Painting is defined by materials and process, these are its essence and so it follows that these are its strengths. Doherty’s works are unencumbered by distracting demands and this fact, combined with his skill and inventiveness, make them very complete and successful paintings.
by neill clements 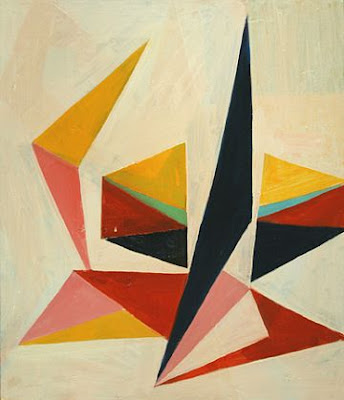 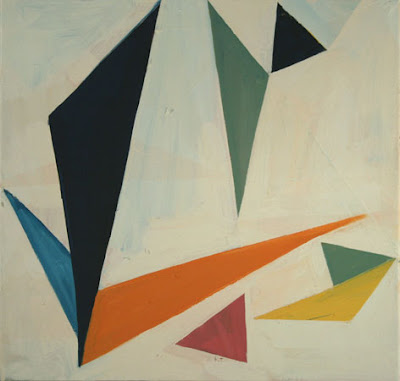 Hard edge painting without the hard edges.
I was tempted to say ‘simple, but effective’ but that would be doing these paintings a disservice. They are not simple; they are good. The off-white background makes them. In fact the entire compliment of colours Aylsworth uses are on the button, they look analogue (as opposed to CMYK) and that is, in my opinion, a very good thing.
by neill clements 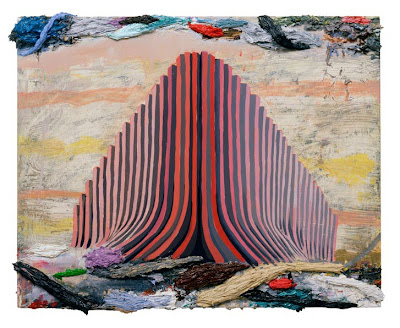 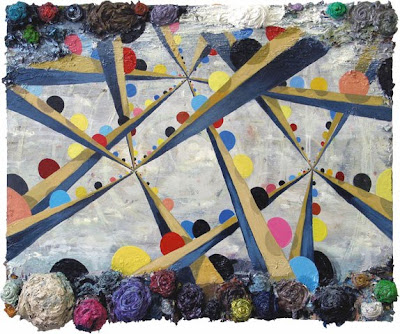 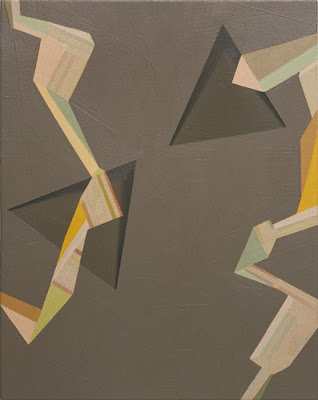 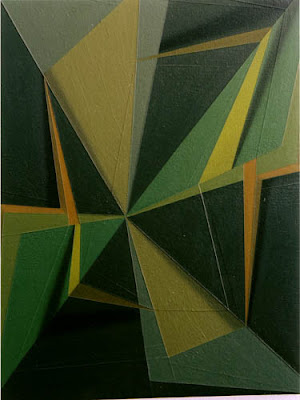 Quality.
Tomma Abts makes work with a purity of intent that is admirable.
The care and single-mindedness of her investigation give it strength. The possibility of extreme specificity is one of painting’s great abilities; one that is underused. The thinner you spread yourself the less likely you will do any one thing well. Abt’s precision and concentration make her paintings special, her works make no unnecessary claims and have few compromises. They look great and their modest scale and method of production are enormously pleasing.
by neill clements 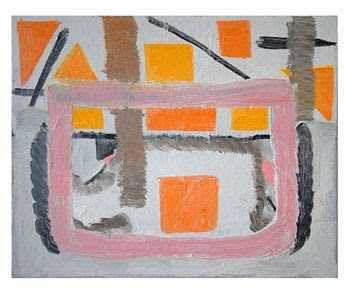 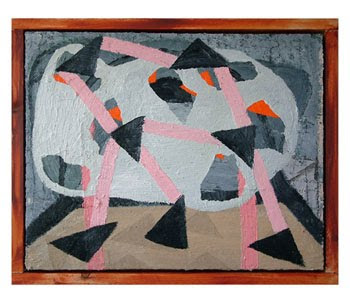 Paul Doran’s paintings have an awkward allure. They seem at once rigorous and uncomfortable. Looking at them brings to mind early 20th century Paris, garrets, and a grubby struggle for authenticity. Their purposeful physicality is complemented by a palette, with its creams and pinks, which evokes Giotto. It is an interesting mix.
The space created in these works is also reminiscent of early renaissance painting. Framing elements have something of the stage set about them and slightly off-kilter forms sit at odd angles to one another.
It is clear that Doran’s pictures are concerned with both the act and history of painting.
by neill clements 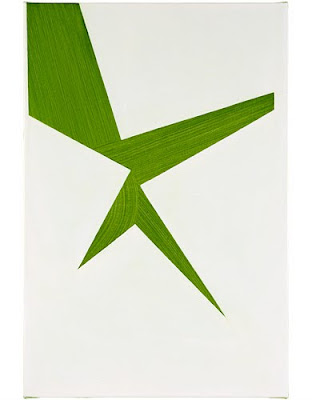 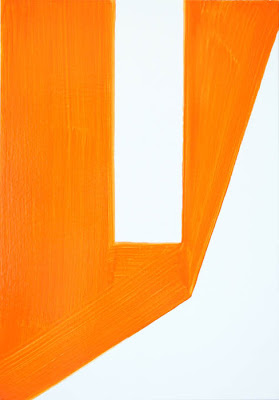 Robert Holyhead’s paintings are economical without ever appearing detached. He gives us just enough and no more. The approach is exacting with trial and error not evident within individual pieces.
Negative space seems to be a consistent (and dominant) feature of his works; gaps and forms appear interchangeable, with what is not there being as important as what is.
In spite of the slightness of the supports (these are not bulky paintings) and a lightness of touch, there is a definite weight to Holyhead’s paintings:  their surfaces, which clearly record process, combine with bold cropping to give a real sense of ‘object-ness’. When they work (which they do more often than not) the paintings are well balanced and have a purity of form that resonates.
by neill clements 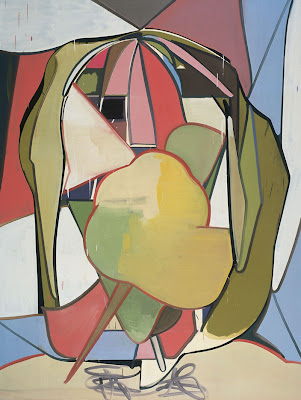 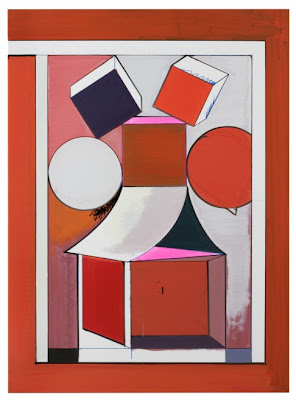 Thomas Scheibitz seems to be effortlessly inventive.
When looking at the quantity and variety of the work he produces it is tempting to think that his arrangements are some how arbitrary, that he just churns them out for a market that likes big, bold colourful paintings. Their qualities, however, refute this. Schebitz’s paintings have something that is at the same time difficult to articulate and hard to dispute. They are paintings with a strong sense of visual ‘rightness’; paintings that consistently work. 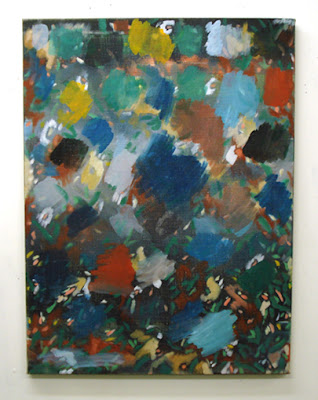 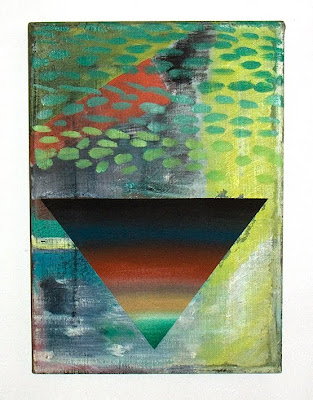 I first came across Jamie Partridge’s work at the Jerwood Painting Prize in 2009. His paintings have a kind of scruffy slacker aesthetic that I really like. They are modest but there is a lot going on. A range of different layers come together to give a genuine feeling of time spent. It’s clear that their composition and execution is highly considered and yet they manage not to be fussy or laboured.
There is no formula for producing good abstract painting (the overabundance of woeful efforts filling commercial galleries nationwide is a testament to this) and so when something hits the mark it should be celebrated. Partridge’s paintings hit the mark. In addition to the qualities aforementioned there is a gratifying irreverence about them, they seem to send up the notion of mysticism without being overtly ironic. It is not about pastiche or parody but rather a demonstration of purposeful endeavour which doesn’t feel it needs to make a point about being earnest.
by neill clements 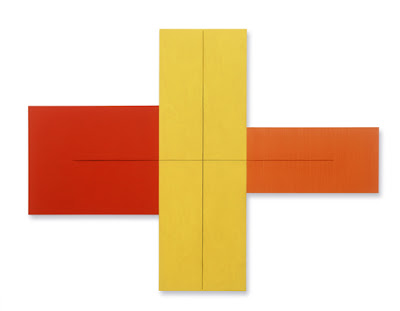 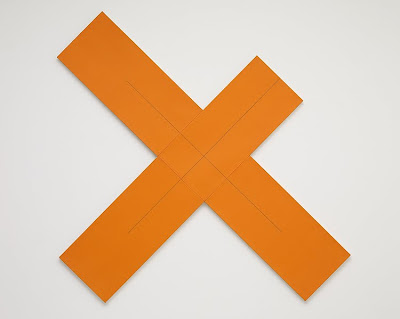 I think Robert Mangold is a good artist to kick off with. Let’s start out as we mean to go on.
His work is direct and succinct. It is efficient without being austere, neat without being clinical.
Mangold does painting as form and colour. There is no pomp or flab. He uses the traditional materials of a painter to make paintings that are about the essential. His palette is neither showy nor dispassionate but perfectly pitched; colour combines with form impeccably and the result is something both visually and intellectually satisfying… well done Robert.
by neill clements