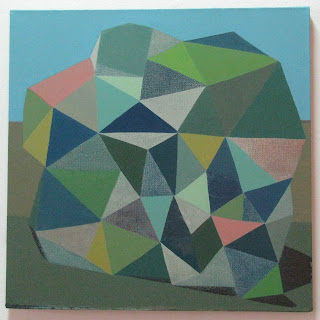 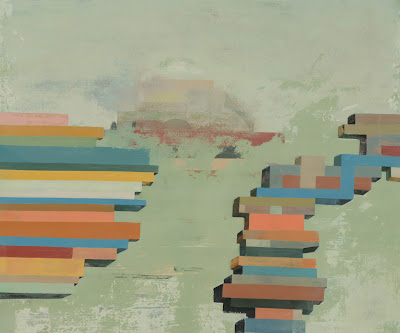 Formal elements interacting in an illusory world.
Hugh Delap’s canvasses often have the feeling of stage sets. They are places of possibility; freed from overt subject while at the same time retaining a breadth of opportunity.
Bold, vibrant forms occupy spaces of considerable depth, existing like players in a fun but indefinite game. The structures he builds up appear weighty without ever being entirely static. Walls and piles are common motifs, perhaps an allusion to materiality and mass, themes that would certainly be appropriate. His works are playful but they are not flippant and it is clear that his decision making is both considered and purposeful. When experienced in the flesh they have significant physical appeal. Their surfaces are a guide to his process; mapping each picture’s production and inviting the viewer to consider the course of his enquiry.
by neill clements